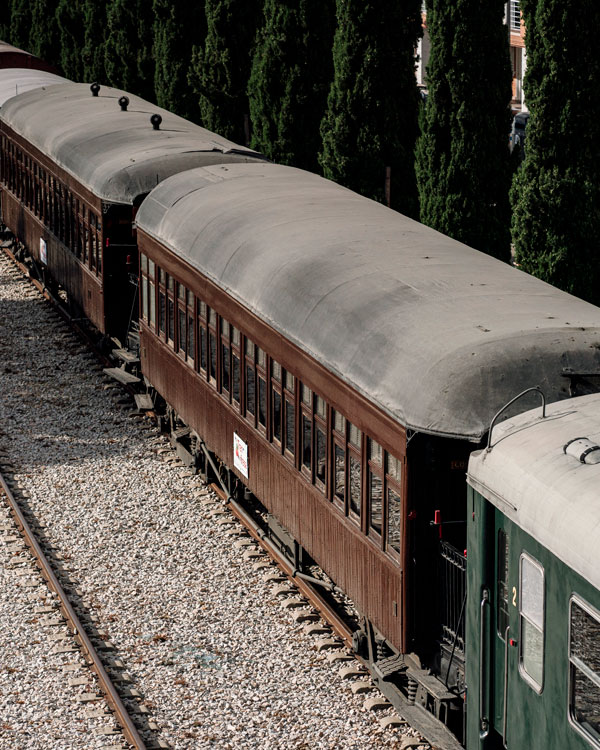 Composition of the train

Take a tour inside our train.

The Costa carriages that make up the Strawberry Train were part of a series of coaches built for the commuter services of the MZA Company (Madrid-Zaragoza-Alicante) between 1914 and 1930. They are wooden coaches since MZA never used metal coaches as they were considered too hot for their southern lines. They are equipped with open platforms with balconies at the ends. Originally it had a steam heating system and gas lighting, which was later replaced by electric lighting.

They are so named because among their most common services were the commuter services of the Catalan coast: Barcelona to Mataró, Sitges... They were used as commuter material or internal service trains until the end of the 1960s. In the last century, four of these coaches were saved for use in filming Western movies, and thanks to this cinematographic use they were incorporated into this train.

Of these, the CC-2435 was built in 1923 by the Company of Material for Railways and Construction for the MZA Company. It has 92 seats on wooden slat seats, distributed in a single space with a central aisle. For its part, the CC-2375 was manufactured in 1920 by the New Yorks American Coach and Foundry Export Company, for MZA. Very similar to the previous one, we should note the bulging roof of this vehicle, characteristic of North American-made coaches. It was attached to the Military Railway Service, where it served as a training coach (VE-6M) and where, from 1985, it was restored to form part of the usual composition of the Strawberry Train of the Madrid Railway Museum. 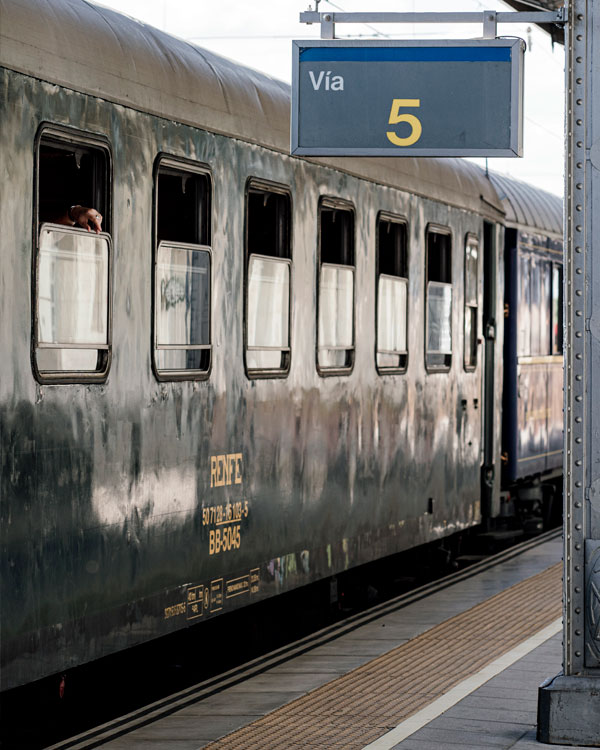 This coach was part of the 5000 Series made up of 345 coaches, one of the first series of metal coaches commissioned by RENFE. Built as a 2nd class coach in the order of 66 coaches (BB 5001 to 5066) between 1947 and 1953, a request that would be completed with another 25 coaches between 1962 and 1963. With these coaches, RENFE massively introduced the use of 2nd class coaches, since the old railway companies practically did not use them.

The manufacture of the first delivery of these coaches was carried out by Astilleros de Cádiz, Devis and Macosa (Barcelona and Valencia). It maintains the novel aspect of its time, with more advanced access doors towards the end of the coach, and more spacious platforms. Painted in olive green with yellow stripes below the windows and yellow "threads" that framed the sides.

It has a side corridor with access to eight departments, with eight seats each, a total of 64 seats, which originally had fabric upholstery, but were reupholstered in the 1960s with green plaster. This coach was modernized in the 1980s for a failed export of material to Cuba, of which there is an improvement in comfort in its seats.


Along with these coaches, our train has two service vans. On the one hand, a freight wagon from the 1960s, from the J-400,000 series. They are airy closed wagons, inside which all manner of things have been transported in its long railway history. Agricultural products, fish, fodder, wood, fertilizers, machinery, livestock... It is a type of wagon that defines the transport of railway goods and that in our train plays the role of a service, energy and workshop van.

Next to it was a truck from the Train Chief DV series. It accompanied freight and passenger trains. In addition to being able to carry parcels, it had a small office for the Train Chief and two cages for transporting pets. As its hallmark, it has two "lookouts": windows that protrude from the box of the van so that the train chief can watch the train while being sheltered from inclement weather.